Things to do in Iceland when you're Dead to the World

Thursday night, on the way home from the Google thingy I bought a Cornish Pasty at Victoria Station. And then a kebab from the dodgy place on Cally Road that does mixed donner and chips with garlic sauce.

This possibly explains why, at 5am, I'm slumped on the floor of my downstairs toilet praying to a previously unpetioned god (any flavour, I'm not fussy) that either I throw up and get it over and done with or that the walls stop crawling in my peripheral vision.

As the great prophet Radiohead said

Matters are complicated by the fact that I want to be on a plane in a few hours.

"And that's what really hurts."

I am not the brightest tool in the box, am I.

A lot can probably be garnered from the fact that I considered the following email a compliment.


The 'this' in question involved going to see a gig. The Sugarcubes to be precise - Icelandic purveyors of quirky pop-indie-rocks known, unfortunately, primarily to most people as being the launchpad for the elfin Björk Guðmundsdóttir (or just Bjork to most people).

To do this post 1992 would normally have involved either

but John, connoisseur of all things aurally Icelandic, had got wind of a 20th anniversay concert they were going to play. Next week. In Iceland.

All told we planned to be in Iceland for around 12 hours.

Clearly this is a plan with no drawbacks. I signed up immediately.

Miraculously I roused myself mid afternoon and made it to the airport on time and with both my passport and sufficent warm clothing to survive the arctic chill. I was still what some might politely call 'feeling delicate'. Attempts at sipping water bought on fresh bouts of rolling nausea that required extended periods of breathy steadily through my nose and out through my mouth. Regrettably the flight was only 2 and a half hours preventing any further attempts at sleep.

Under ideal circumstances I can stay up late and have done a number of all nighters both business and leisure orientated but, to be honest, I'm better at getting up early than staying up late.

These were not ideal circumstances.

For the first time I began to realise that once on the plane there was really no plan B. All hotels and hostels were fully booked in Reykjavík so the best to hope for, in the event of complete bodily malfunction, was to sleep in the airport or bus terminal if such a thing was allowed.

It's not even like I could use alcohol to quieten the creeping doubts.

I took another sip of water and concentrated on keeping it down.

Reykjavík is tiny. 100,000 people tiny. According the the Lonely Planet guide a favourite past time of Icelandics when meeting each other for the first time is to work out how they're related. They use a patronymic naming system - you take your father's first name (or, in rare cases where the father is not known, your mother's) and add 'son' or 'dóttir' depending on whether you have boy parts or girl parts respectively. Since this means that there are a lot of Magnus Magnussons and Jon Jonsons the phone book is ordered by first name and includes a person's profession. Danish Vikings would raid Ireland, steal pretty girls and then stop off at Iceland on the way home and swap them for beer. This is my kind of genepool.

Flying into Keflavík is pretty much what I'd expect landing on the moon would be like. The long FlyBus ride from the airport into town wends its way through a lunar landscapre punctuated by Aluminium factories and sculptures. For nearly an hour it's nothing but odd buildings then a brief glimpse of a ring road, then a KFC and bamm - you're at the bus station. The main bus is too large to make it to the hotels so we walked. The map gives no sense of scale whatsover so, even though I know that, geographically, Reykjavík is small, it comes as a shock that it only takes 10 minutes - past the pond and turn right onto Laugavegur. That's it. Mentally we'd blocked out more time for travel so there are about 4 hours to kill before the concert.

We holed up in Kaffibarrin as part owned by one Damon Albarn and sip beers and watch the people go by. People worked, people gossipped. The cognitive disconnect meant that it was hard to fully process that we were in Iceland. Iceland! Just watching the world go by seemed to be an apropos thing to do.

The sordid subject of food raised its head - mentally I knew that it was a necessity but my body was still in the severe state of distrust common to abusive relationships. We ummed and ahhed over pylsur med ollu (hot dogs with the works - a staple by all accounts) but, after much shennanigans we opted for Lækjarbrekk - a restaurant worryingly close to the tourist information center.

The food was spectacular.

In retrospect it saved my life.

I love you lamb tasting menu.

Many other people will write better reviews of the concert. There are bound to be thousands of photos neatly tagged on Flickr. The intersection between people who like The Sugarcubes and people who like Flickr is large and obsessive. Múm appeared in a new line up and were agreeable batshit in terrifyingly catchy way. Surrounded by an age spectrum that ranged from 5 to 50 we bopped along to the main event. Icelandics appear to share a common gene that means they can't dance but equally can't seem to care either. The whirling arm waving on stage, the hooting uluations, the screeches, they were all mirrored by our fellow Björkanauts

Almost pathologically friendly, the obscure slogans projected on giant screens were helpfully translated by our neighbours as was the singular repeated phrase from the final encore in case we couldn't work out what Lüftguitar! meant 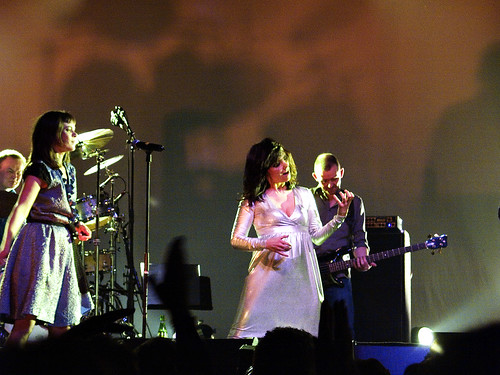 The songs that I'm used to in English remained as good in Icelandic, the sing song accent seems almost better suited to the brand of music - lilting lyrical traipse through whimsy. I felt myself slipping into the same detached trance I felt in a field in Glastonbury, on my own in a melting crowd of ravers watching Orbital's last hurrah.

We were accosted on the way home by a woman who demanded that we went into Dillon's bar with her. She was on her own waiting for friends, she said, and wanted to talk to someone. She was a journalist. Her sister's daughter part owned the bar. Her other sister owned a horse riding stable out in the countryside. She'd lived in Barcelona. She hated her (impeccable English) which wasn't as good as her Spanish. She introduced us to random people, many of whom we bumped into later that night. It later transpired that she didn't know them either. It wasn't even that we were a good conversation piece to be used as an opening gambit. This was Just How It Was Done.

We tested the theory by leaving our guide book on the table and asking people to sign it with something Icelandic. We met Sara, Jakobina and Helga who recruited us for The Runtur, the pub crawl up and down Laugavegur. Sara knew the keyboardist from The Sugarcubes. Or she was her aunt or cousin. We might see them at Sirkus or Vegamot or Olstofa later.

The bars on Laugavegur are like someone personally consulted with John and I and designed The Best Night. Out. Evar! The Cafe/Bars are chilled, the pubs agreeably bustling without ever seeming to get too crowded. And the music. Oh the music. Early to mid 90s indie. Every place we went to played The Pixies within about 12 minutes of our arrival. Bar 11 was like the best house party you've ever been to - a towering twisty old building packed with people talking and doing their best impression of dancing. I made a hundred new friends that night. The girls told people of our plan to stay awake until the flight and it was met with warm approval. That and my ginger stubble was clear proof that we were Vikings. John's nigh on encyclopedic knowledge of Icelandic musical trivia was a further string in our bow. A large bearded man took an instant liking to me and fed me whisky every time I bumped into him.

It was loud and crowded and genial and there was singing and pushing and we loved it.

By the time we walked back to the station and caught the bus back to the airport I was so wired, hopped up on my 8th or 9th wind, that I couldn't sleep. Home seemed disapointingly normal. I reread a friend's account of her honeymoon in Iceland, I reread the guidebook. I watched as Flickr got populated and videos trickled onto YouTube and went to the cinema and stayed up til midnight again, cruising on the adrenalin residuals and slept like the dead.


As a text message I sent sometime during the trip said -

Alternatively just watch Triumph of a Heart. But, you know, without the cat.